Maybe people assume you’re one gender, but you know you’re another. Maybe you’ve identified with one sexuality your whole life, but that doesn’t feel right anymore.  Or maybe you're not sure how you identify, or who you're into.

Whatever your journey might look like, feeling good about who you are and who you like can have a huge, positive impact on your mental health, which can also positively impact your relationships, like with your (chosen) family, friends, partners, and more.

Still, figuring out your gender identity and sexuality can be... ✨a process✨. We’re here to support you through your journey of learning more about yourself, what gender and sexuality mean for you, and how you can begin sharing them with others. 💓

Gender is a Construct

From the moment we’re born (and sometimes, even before – looking at you, gender reveal parties! 👀), society puts us into one of two categories: female or male. But many people's experiences of gender are not represented by these two categories.

Some people think that gender has to do with what body parts you're born with, but that's only one part of your assigned sex at birth. Your assigned sex is based on your hormones, reproductive organs, genitalia, and chromosomes. We're all assigned a sex at birth ("It's a boy!"), which is usually based on what genitalia we have (what they should really say is, "It's a penis!"). Usually, we’re assigned male, female or intersex based on our external genitalia. Intersex people have unique hormones, reproductive organs, genitalia, or chromosome combinations. Being intersex is pretty common – about as common as being born with red hair! 🔥

Most of us grew up with the gender binary, meaning we were taught that there are only two genders: female or male. We're also taught that these two genders are total opposites of one another and don’t overlap. But the reality is, your gender identity is separate from your assigned sex at birth, meaning no one gender identity belongs to any assigned sex.
The ideas we have about gender are based on what society tells us. For example, these can include how to behave, how to speak, how to dress, and what activities or interests we “should” have. But these ideas are totally invented! 💥 That’s also why different cultures have unique ways of understanding gender.

For example, before colonization in Canada, some Indigenous communities viewed gender variance as a gift, and many Indigenous communities didn’t label sexual identity.  Some Indigenous peoples may identify as Two-Spirit, an English term that was created by Two-Spirit people, to encompass experiences of carrying male and female spirits alongside cultural roles. These roles can include specific relationships with the land, water, spirituality, community, and more. 🌿

Many folks identify differently from the sex they were assigned at birth, and every experience with gender deserves to be valued. The more we learn about the different ways we can identify and express our gender, the closer we get to feeling like our most authentic selves. Remember, only you get to decide what your gender is, and it doesn’t have to stay the same as you go on your journey of self-discovery. 🌈

Pronouns are for Everyone

One way gender shows up in our everyday lives is through pronouns, which are words we use to refer to people. For example, when we say, “She’s inviting her girlfriend,” or “he’s talking to his brother,” we’re using pronouns that refer to someone’s gender. Some languages don’t have gendered pronouns, meaning they just have one neutral word or way of referring to someone. But in the English language, pronouns are gendered.

Folks whose gender experiences are not represented by the gender binary, like non-binary, genderfluid, or genderqueer folks, may choose to use gender-neutral pronouns, like they/them, ze/hir, or ze/zir. Other people may use a combination of pronouns, like both she/her and they/them. Some folks are cool with any pronouns! Others may not think much about their pronouns at all. Trying out different pronouns to see which feel most like yourself can help you learn more about how you want to be seen and understood by others.

Pronouns are important because they help us feel seen and validated in our gender identity. They can be a learning curve for some, but the people who love you should be willing to accept and respect how you wish to be addressed, and make the effort to show you that they care.💕

P.S. It’s always best to ask what people’s pronouns are and not assume their gender identity. Remember our ✨ golden rule ✨ of #AlwaysAskFirst! 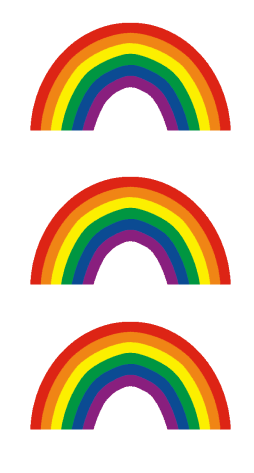 The ways we express our gender aren’t necessarily gendered, either. For example, if you like to keep your hair short, it doesn’t mean that short hair has a gender. This also applies to clothing, colours, behaviours, and all the other ways you express your identity! The ways you express your gender can change from day to day and can be endlessly creative.  Some days you might dress to lean more towards your feminine side, and other days, you might lean more towards your masculine side – it just depends on how you’re feeling.

How you choose to express your gender is your choice, but sometimes expressing your gender freely isn’t always possible. For example, some folks can’t share their pronouns with the people in their lives because it could be unsafe. New clothes can be expensive, and making more long-lasting changes, like to your body or personal documents, takes time and costs money. Regardless of how you’re able to express your gender, your identity is yours, and how you feel is real and valid. You deserve to be able to live as your truest self, and there are people out there who are like you, and who will accept you as you are. If you’re looking for someone to talk to about your gender identity or sexuality, click here for some places to check out.

Your sexuality is separate from your gender identity and has to do with the people you’re attracted to. When you’re attracted to someone, it doesn’t always mean you want to have sex with them. Attraction can be experienced in different ways, like platonic, romantic, and physical attraction. Like your gender identity, there are lots of different ways to describe your sexuality. Check out this section for some examples.

How you experience or define your sexuality may change over time because as you grow into yourself and change as a person, you might find that you’re attracted to different kinds of people from who you initially thought! 🌈 For example, if you start dating, you might realize that you’re attracted to more than one gender. Sometimes when people feel this way, they identify as bisexual. Finding a word to describe your sexuality can be really empowering! For some folks, it can help them feel like they belong and have a community. For others, a label might feel like it’s not completely accurate, or maybe your experiences with gender and sexuality are too complicated to fit into a single word. Whether you label your identity or not, your sexuality is always yours, just like your gender. 💖

P.S. Your sexuality is also only one part of who you are! For some people, it’s a really important part of their identity. It might affect the kind of hobbies they have or who they get along with. For others, sexuality isn’t as important as other parts of who they are. No matter what, you get to pick how you want to talk about your sexuality.

What’s in a Name?

Below are some common words folks might use to describe their gender identity or sexuality. Remember that the meaning of these words can be different depending on who you ask, and there are so many more ways to describe our gender identities and sexualities than what’s listed here!

Folks who don’t identify with any gender.
Agender

Coming out can be the process of telling people in your life about your gender identity or sexuality. It's also about your personal experience with coming out to yourself, and accepting your gender or sexual identity, regardless of whether you tell other folks about it. There’s no one way to come out if you decide to do that, and you don’t need to come out in order to be valid in your identity. 💖
Coming out is a decision that only you can make, at a time when you feel is right.

Before coming out, it's important to think about how your relationships with your friends, family, and partners might change. Sometimes, coming out can help you feel closer to the people in your life because you can exist around them as yourself. Other times, they might not respond the way you want or expect them to, which can put you in a difficult or unsafe situation. Check out our blog post for some more tips on how to come out, and some things you might want to consider first.

Some folks may have negative ideas about the 2SLGBTQ+ community, which can also affect how people might respond to your coming out. Your identity is something you’ve probably thought about for a long time, but they’re only hearing about it now, which sometimes prompts emotional or intense reactions. Sometimes the people in your life need to go on their own journey after you’ve shared your identity with them. Still, you shouldn’t have to change or modify your gender identity, sexuality, or gender expression to make anyone else more comfortable. Always remember that other people’s feelings are not your feelings, meaning that you’re not responsible for how they react.

For some, coming out can mean losing your home, work, family, community, and so much more. Not being accepted by the people in your life can cause emotional hurt for many 2SLGBTQ+ folks, which can sometimes lead to longer-lasting challenges with your mental health. Growing up in a society and culture that views heterosexuality and cisgender identity as the “norm” for everyone (also known as cis-heteronormativity), is just one of many reasons why 2SLGBTQ+ folks are more likely to experience mental health challenges than others.

If you’ve experienced loss after coming out, it can be helpful to try and connect with folks who understand how tough the world can be, and who will accept you as you are. Sometimes, we call these people our chosen family. 🌈 People who affirm and validate our existence are so important to our mental health because when we have folks who accept and care about us, we can manage the other obstacles we go through in our lives better. ⭐

If you’re looking for someone to talk to about your gender identity, sexuality, or mental health but you’re not sure where to start, here are a few supports that you can call, message online, or text:
Thank you! Your submission has been received.
Oops! Something went wrong while submitting the form.
BACK:  MENTAL HEALTH
NEXT: UNDERSTANDING OUR EMOTIONS